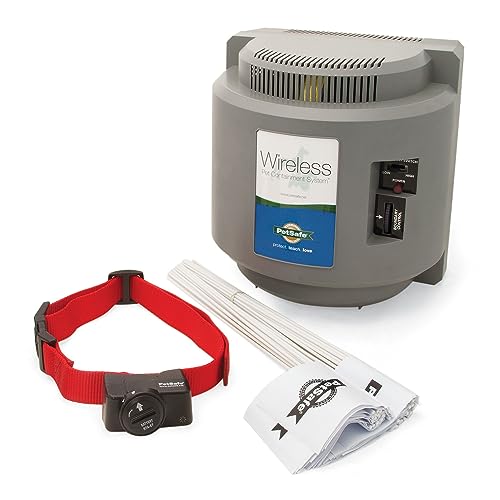 The PetSafe wireless pet containment system is one of the systems that have been proven to be safe, effective and comfortable for all pets that weigh over 8 pounds. This system works simply by transmitting radio signals to a distance of 90 feet at most multidirectional. The pet containment system is characterized by boundary flags that play a significant role in offering visual aids during pet training. While in the system, the pet wears a receiver collar that touches its neck and thus can move freely in the pet area. However, in the containment system, when the dog reaches the boundary zone, the receiver collar sounds a warning before giving a safe static correction. 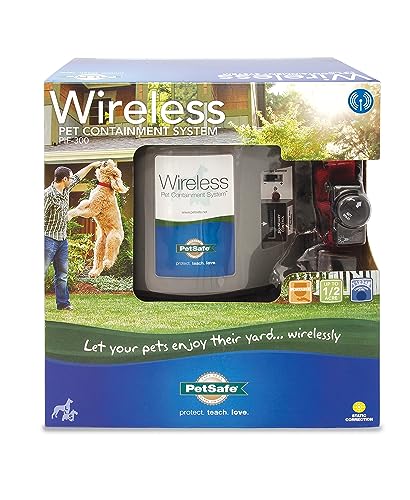 The PetSafe wireless containment system creates a circular wireless boundary that maintains the pets in an enclosed pet area. The system allows for easy adjustment from about 5 to 90 feet across all directions starting from the transmitter indoors. The system is easy to use as it only requires you to plug in the transmitter at home and to place the receiver around the dog's neck. This makes it quite versatile and thus outweighing other traditional methods employed in dog containment such as outdoor fencing or even buried wire fencing. If you are looking for a containment system that offers you many benefits, then PetSafe wireless pet containment system is for you! However, one thing that you have to bear in mind is that you have to properly train your pet to remain inside the wireless signal boundary. This training is not easy as it is time-consuming, but it is worth it. The containment system is designed in such a manner that its deterrent. The main reason for this is always to serve as a reminder to the pet to remain in the established boundary through the use of Static correction. Training of your pet should be done on a regular basis. Another factor that you have to take note of is that each pet has different tolerance level to the Static Correction. Therefore, not all pets can be retained in the boundary despite the training. This means that, if you have a reason to believe that your pet could pose a great danger to the people in their surrounding or even harm himself, you should consider employing other containment techniques along with the PetSafe wireless pet containment system to effectively confine your pet.