We can’t give you an exact figure when answering the question “how long do hamsters live?”

Many factors influence whether your pet hamster lives for mere months or years.

One look at a hamster and you’re in love. You’re ready to bring it home. There’s just one question nagging you: how long do hamsters live? You don’t want to set yourself up for heartbreak. At the same time, you don’t want to miss an opportunity to raise this ridiculously cute creature.

We get you. After all, hamsters make for great pets. They’re low maintenance, independent and relatively inexpensive. And, perhaps somewhat surprisingly, they have huge personalities. The only downside is the actual answer to how long do hamsters live. Because to tell you the truth: they don’t live that long at all.

How Long Do Hamsters Live?

Sadly, the answer to the question “how long do hamsters live?” is bound to disappoint you.

You see, hamsters have a relatively short life span.

An average pet hamster lives to be between two and three years old.

That’s probably not the answer you were hoping to hear when you asked the question “how long do hamsters live?” though, and we don’t blame you.

A Variety of Factors Influence Your Hamster’s Lifespan

We can’t give you an exact figure when answering the question “how long do hamsters live?”

Many factors influence whether your pet hamster lives for mere months or years. 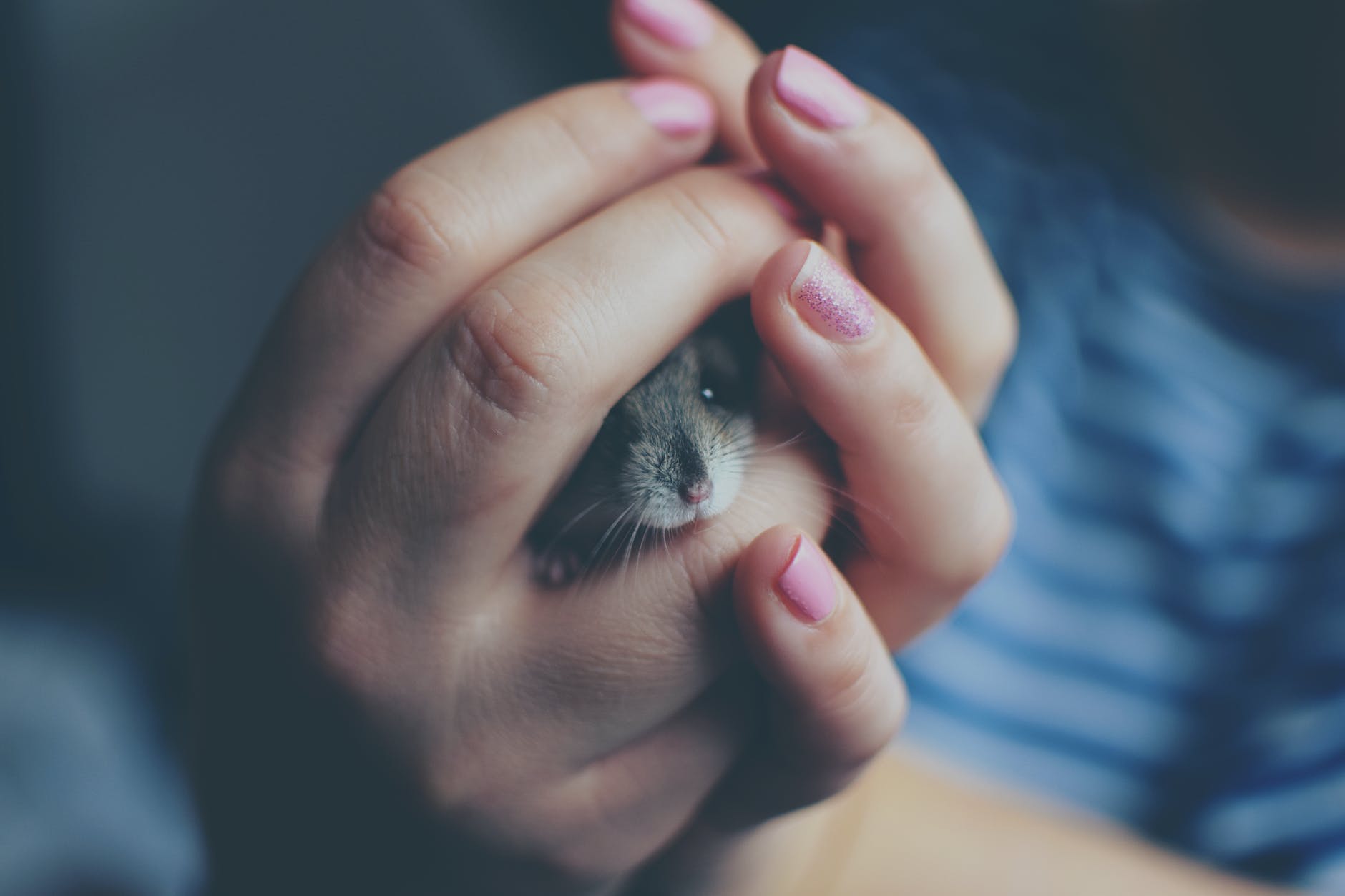 Image by Rudolf Jakkel via Pexels

Species is perhaps the most critical factor in determining the answer to how long do hamsters live. While there are many types of hamsters in the world, only five of them are kept as pets.

Some hamster species have a much longer lifespan than others.

In general, the smaller the species, the shorter its life expectancy.

On average, Syrian hamsters, the most popular hamster species in the world, live for two to two and a half years.

The affectionate Chinese hamsters keep their owners’ company for one and a half to two years.

Campbell’s dwarf hamsters tend to stick around for around two years.

Winter white Russian dwarf hamsters live to be at least one year old, but some make it to their second birthday.

Finally, Roborovski hamsters, the smallest hamsters in the world, tend to reach the ripe old age (in hamster world) of three years before they pass on, and some even live until they’re three and a half years old.

Keep in mind that the above are just guidelines. Your pet hammy could live for much longer (or shorter). 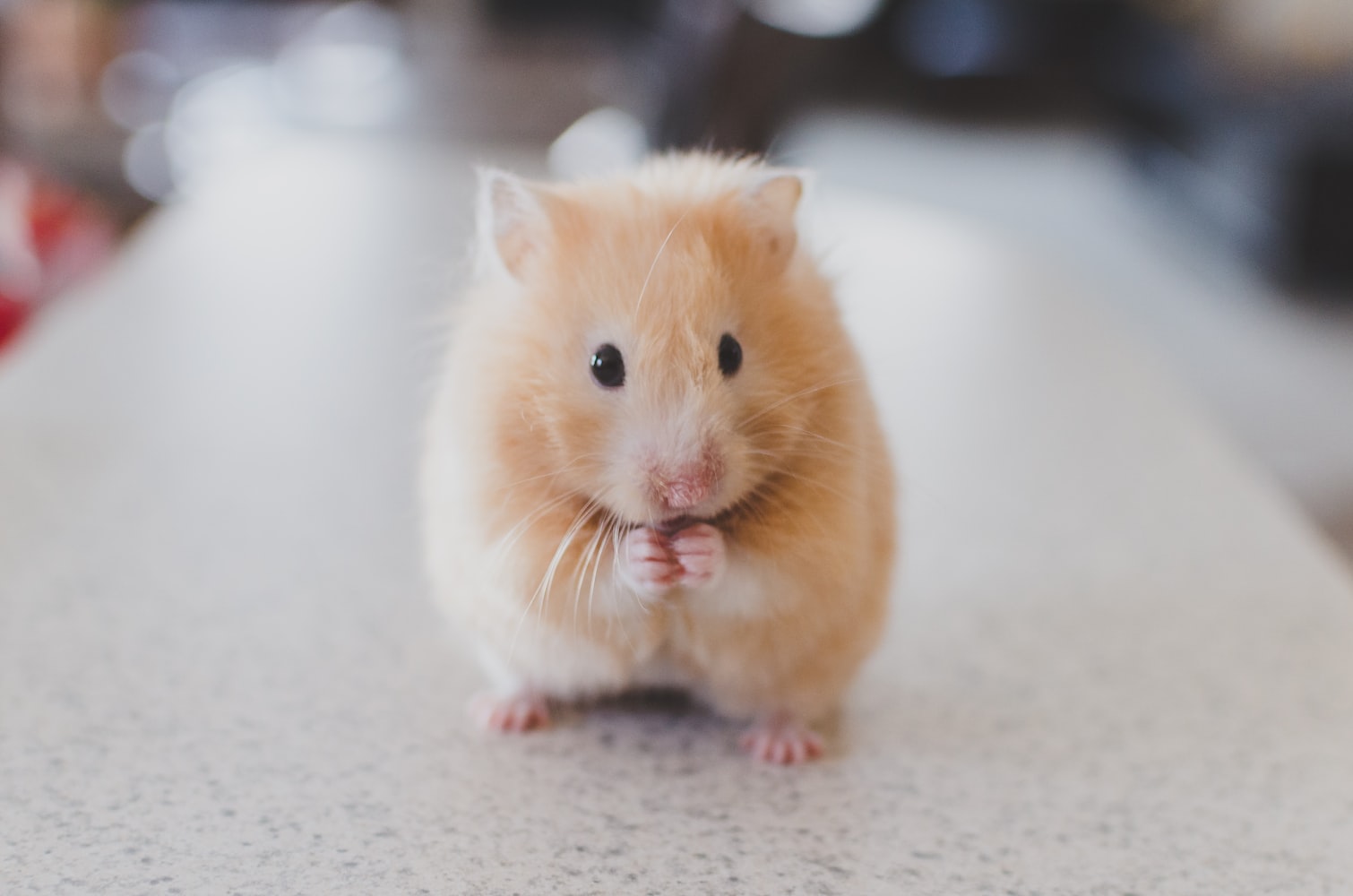 Image by Ricky Kharawala via Unsplash

You’re unlikely to think of your hamster’s genes as a factor that could influence the answer to “how long do hamsters live?”

Hamsters with hardy parents or grandparents tend to live longer, not to mention healthier, lives.

But of course, your hamster’s genes are out of your control, so it’s no use getting hung up on this particular factor.

Healthy eats and a gym membership 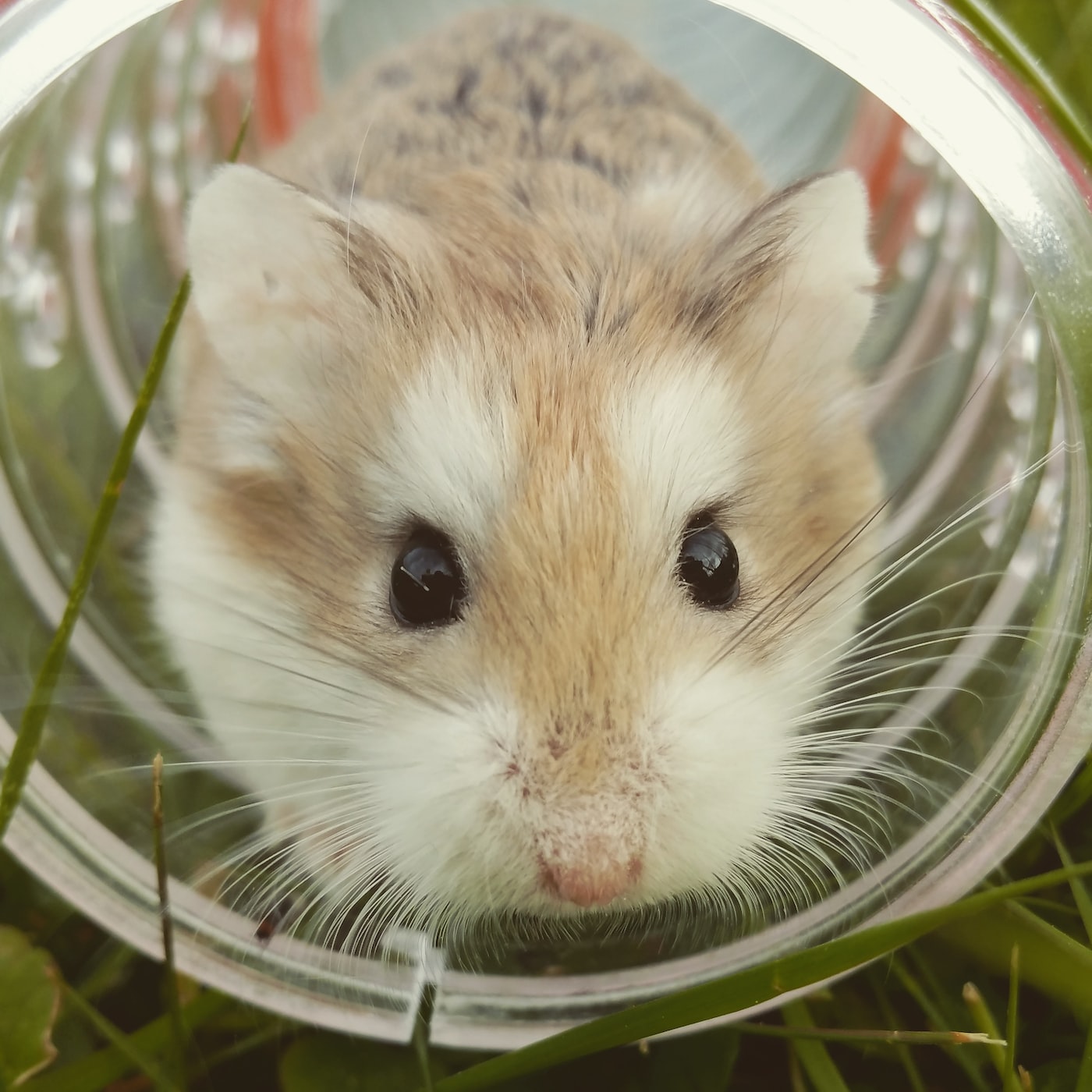 Image by My Name via Unsplash

Two important things that can change the answer to “how long do hamsters live?” include your hamster’s diet and exercise regime.

A balanced diet will help ensure that your pet hammy leads a long, happy life.

While hamster mixes are readily available, they tend to consist of fatty seeds, grains, and nuts, causing obesity and other issues.

Instead, opt for pellets tha​​t contain between 15 to 20 percent of protein.

Hamsters love fresh fruit and vegetables. Don’t be afraid to indulge them once in a while but don’t go overboard with the treats either. Too much sugar can cause diabetes.

Furthermore, not all fruits and veggies are suitable for your tiny friend.

To avoid upsetting your hamster’s stomach, only give it one or two types of fresh food in one go.

Finally, make sure that your hamster has access to fresh water at all times.

Hamsters are quite active. To prevent boredom, obesity and health problems that stem from inactivity, supply your furry friend with an exercise wheel.

But be careful. It’s not unheard of for hamsters to break their little legs in wire wheels. Wire mesh wheels are just as risky. For that reason, opt for solid-surface wheels.

Hamsters also love things such as toilet paper tubes and small pieces of wood. The latter will help prevent your hamster from chewing on wheels.

You’ll most likely also want to invest in a hamster ball. Only let your hamster use it when you’re around though. Otherwise, it might end up injuring itself. 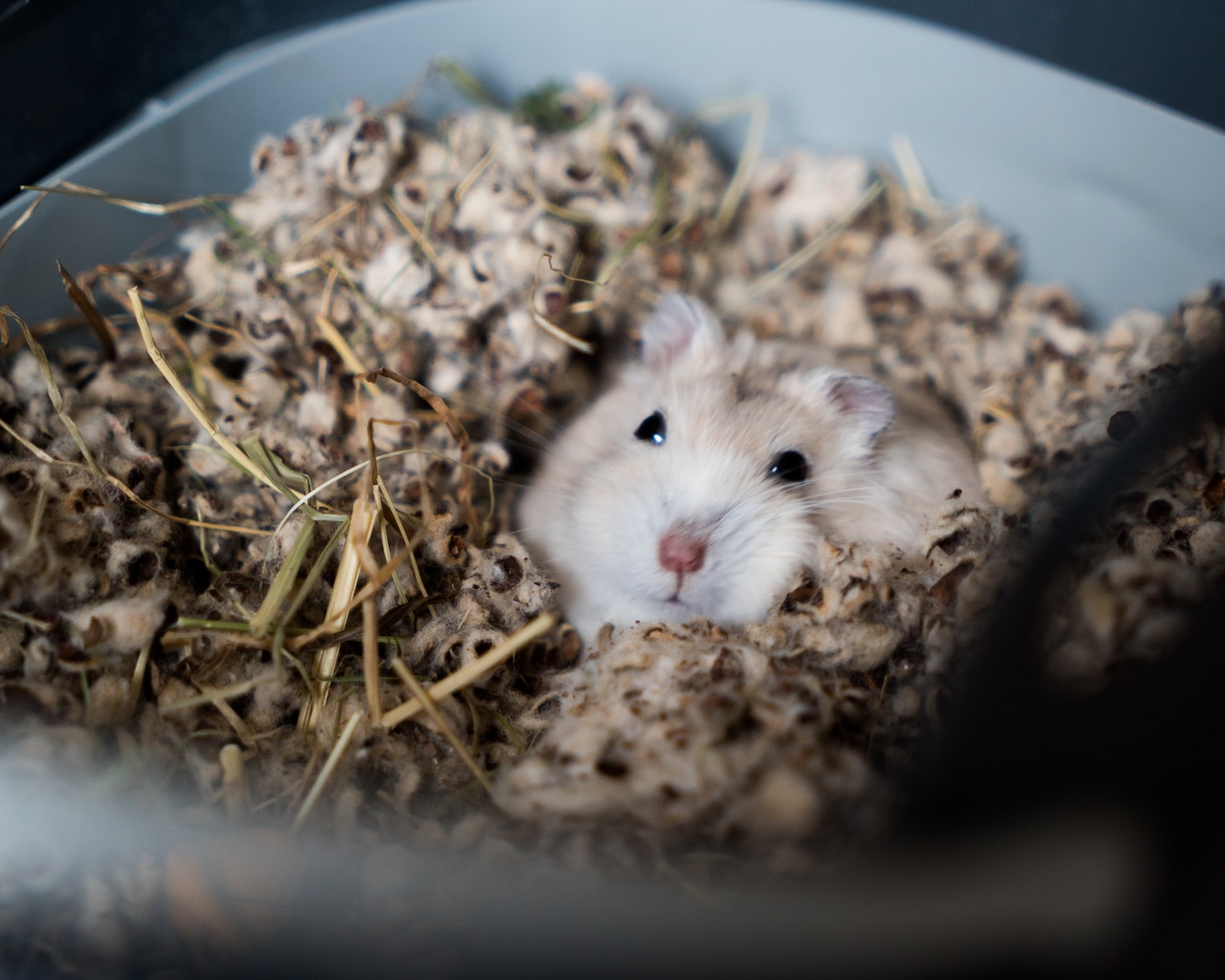 Image by Björn Antonissen via Unsplash

Your pet hamster might live longer if you provide it with an appropriate environment.

Generally, it’s advised that you go for a cage that is at least 15 inches long by 12 inches high.

Ensure that the cage is made out of wire, has a solid bottom and is escape-proof. After all, you don’t want your tiny friend getting lost in the house!

Go for bedding made out of plant-based paper fiber or cellulose fiber.

Scented bedding is also a big no-no. Why? Because it contains chemicals that could also lead to respiratory problems, thus contributing to your pet’s early demise.

You might also want to give your little friend a tiny house within its house (aka its cage). A ​small box​ turned upside down is ideal. This is where your hamster will sleep and hide in times of stress.

Don’t forget to clean the cage regularly too. A clean cage not only prevents your hamster from getting sick but also ensures that it doesn’t transmit any diseases to you!

Keep the cage in a warm place. Anywhere between 65 to 75 degrees Fahrenheit is ideal. Make sure there are no drafts. Avoid direct sunlight, fireplaces, heating vents and items that generate ultrasound.

Lastly, if you own more than one pet hamster, make sure that you house them separately.

Most adult hamsters are aggressive towards other hamsters, even family members. They can injure, maim and in extreme cases, even kill one another. 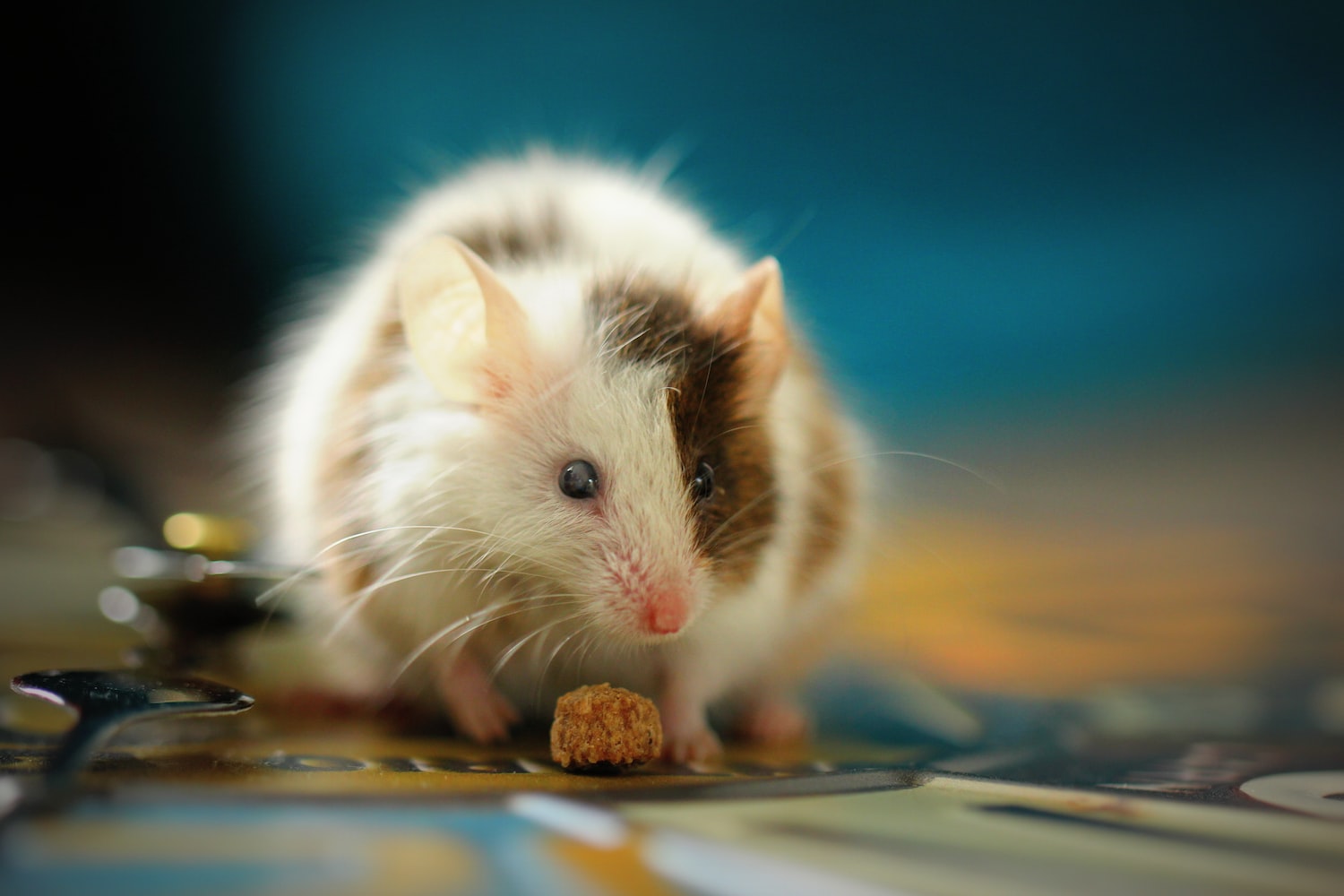 Image by Sandy Millar via Unsplash

By disrupting your hamster’s wet tail (natural cycle), you are potentially altering the answer to the question “how long do hamsters live?” by causing it to age prematurely.

Hamsters are usually most active at dawn or dusk as well as during the night. Consequently, they tend to sleep during the day.

Respect your pet’s natural rhythm of life, and it might just live longer.

While the general answer to the question “how long do hamsters live” is between one and three years, your hamster might die before it reaches its first birthday if it contracts a disease.

Hamsters often fall prey to wet tail, a bacterial disease caused by sudden changes such as a new environment or an overcrowded cage.

If not treated within 48 hours, this disease can be fatal. Loss of appetite, diarrhea, failure to groom and lethargy are all signs that your hamster might have wet tail.

Also, it sounds weird but:

Humans can infect their pet hamsters with colds. And while common cold may not be that big a deal for a human, it can cause a bacterial respiratory infection in a hamster.

So, make sure that you always wash your hands before you handle your hamster.

But don’t think that you only have to wash your hands if you’re sick, either.

You could very well be carrying germs that you picked up outside, thus infecting your small, cuddly friend without even knowing it.

In addition, hamsters that have contact with other animals are also more likely to fall prey to disease.

You might not realize this, but hamsters are also prone to stress and can develop stress-related diseases.

The following are good indicators that your hamster is ill:

In general, make sure that you bring your hamster for regular vet check-ups (at least once a year). Medical problems that are caught early are easier to treat.

It’s only natural that you want an answer to “how long do hamsters live?” before you bring one home. Getting attached to a pet is easy and getting over one is heartbreaking.

Unfortunately, the answer to “how long do hamsters live” is somewhat devastating. Hamsters don’t live long at all. If you’re really lucky, you’ll get to spend three to four years in your hammy’s company.

Reduced activity and less interest in food mean that your pet hamster is not long for this world.

But it’s not all bad news.

Now that you know the answer to “how long do hamsters live?”, you can make the most of your time together.